SINGAPORE – Videogames take centre stage at ArtScience Museum, in a new major exhibition, Virtual Realms: Videogames Transformed. Making its global premiere in Singapore on 12 June, Virtual Realms is curated and organised by the Barbican in co-production with ArtScience Museum and Melbourne Museum.
Co-curated by celebrated Japanese videogame designer, Tetsuya Mizuguchi, Virtual Realms is a multi-sensorial exhibition that re-imagines videogames as a 21st century artform. The exhibition brings together interactive works by six of the world’s leading videogame developers, who have collaborated with top media design studios to create a series of large-scale, immersive installations.
The game developers at the centre of the exhibition are KOJIMA PRODUCTIONS (makers of the hit game DEATH STRANDING), Enhance (Tetsuya Mizuguchi and team behind Rez Infinite and Tetris Effect), thatgamecompany (authors of the meditative games Sky: Children of the Light and Journey), Tequila Works (the studio that made Deadlight and RiME), Media Molecule (creators of LittleBigPlanet and Dreams) and David OReilly (artist and creator of the games Everything and Mountain). They have partnered with media artists and design studios, Rhizomatiks, FIELD.IO, The Mill, Marshmallow Laser Feast, onedotzero and The Workers to make six new commissions that transport videogames from the screen into the galleries.
“We are delighted to be working with the Barbican in London on the world premiere of this extraordinary new exhibition at ArtScience Museum. Perfectly aligned with ArtScience Museum’s mission to explore the intersection of art, science, culture and technology, Virtual Realms brings cutting-edge videogames into a museum setting. It enables visitors to step inside worlds created by renowned videogame developers. The six newly commissioned artworks at the heart of the exhibition take the form of stunning participative installations. By extending the story worlds, aesthetics and interactivity of well-known videogames into spatial environments, the exhibition offers a different kind of museum experience. It invites visitors to venture on a journey of light, music, contemplation and play, experiencing how contemporary videogames have truly become a 21st century cultural phenomena,” said Honor Harger, Executive Director of ArtScience Museum.
“By creating these exciting new collaborations, Virtual Realms offers game developers a unique opportunity to break free from the constraints of consoles and formal game playing and really push the boundaries of how videogames can be experienced together. This exhibition paves the way for a future where the world of games spills out beyond the screen.”, said Tetsuya Mizuguchi, Co-Curator of Virtual Realms and Founder of Enhance
”Over 20 years since the Barbican launched Game On, it is hugely exciting to be returning to the subject of videogames in such an ambitious fashion. In Virtual Realms, Tetsuya Mizuguchi and the design teams have established new, playful and experimental approaches with contemporary videogames as a medium. Six of the world’s leading game developers have collaborated with cutting edge media designers to create these immersive interactive experiences, celebrating collaboration and creativity across the artforms. My thanks to our co-producing partners, ArtScience Museum and Melbourne Museum and the incredibly talented artists designers for sharing and supporting our vision for Virtual Realms.”, said Patrick Moran, Co-curator and Acting Co-Head, Barbican International Enterprises.
Inside the Virtual Realms
Each of the six new commissions is a kaleidoscopic realm driven by a unique theme. The themes of the six virtual realms are: SYNESTHESIA, UNITY, CONNECTION, PLAY, NARRATIVE, EVERYTHING.
SYNESTHESIA
Rezonance, 2021
By Enhance (game developer) and Rhizomatiks (media designer) 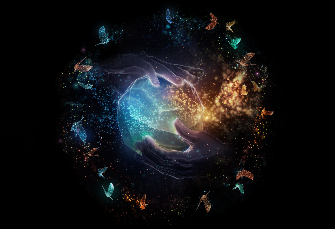 The first realm of the exhibition looks at synesthesia – a neurological phenomenon in which the boundaries between the senses are blurred and where sounds can be ‘seen’ and visuals can be ‘heard’ or ‘felt’.

Tetsuya Mizuguchi has explored the potential of synesthesia since his 2001 game, Rez. Unique among videogame designers, this interest has led to some of the most critically acclaimed titles in the medium, Rez Infinite (2016) and Tetris Effect (2018). Acclaimed Japanese artistic research collective, Rhizomatiks created the Tokyo segment of Olympics’ closing ceremony in Rio De Janeiro in 2016. They also made the world’s first live streamed 360º virtual reality performance for singer, Björk.
Mizuguchi’s experiments with synesthesia have been expanded into a large-scale format, resulting in the new installation, Rezonance (2021). Upon entering the SYNESTHESIA realm, visitors will be part of the pulsing rhythmic beat and become a ‘traveller’ on the Rezonance journey. It allows visitors to encounter this sensorial state as a shared experience. Using light, sound and technology developed specifically for this exhibition, Enhance and Rhizomatiks have created an unexpected synesthetic encounter, which will transport visitors to other worlds and dimensions.
UNITY
Together: the distance between (us), 2021
By thatgamecompany (game developer) and FIELD.IO (media designer) 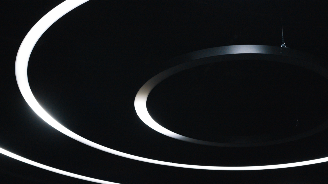 Photo credit: Together: the distance between (us), thatgamecompany and FIELD.IO, 2021
In the UNITY realm, the dreamlike world of thatgamecompany’s Sky: Children of the Light (2019) has been transformed into an immersive spatial environment. As one moves beneath the circular light-sculpture, music and audio fragments from the game, Sky, are triggered and a choreography of light sequences unfolds.
Working with creative studio FIELD.IO, thatgamecompany presents Together: the distance between (us) (2021), an immersive experience where visitors become players in an all-encompassing generative instrument. Visitors will explore the relationship between movement, light and sound as their presence and participation will influence the composition of the space.
CONNECTION
WALL, 2021
By KOJIMA PRODUCTIONS (game developer) and The Mill (media designer) 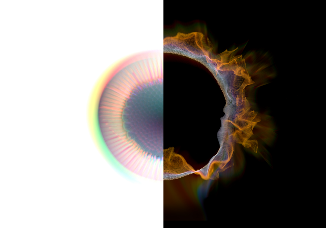 Photo credit: WALL, KOJIMA PRODUCTIONS and The Mill, 2021
Tokyo-based videogame developer KOJIMA PRODUCTIONS, has partnered with the global production studio, The Mill to create, WALL (2021). The Mill is best known for their stunning digital effects and immersive, interactive experiences across the advertising, marketing and film industries.
The key theme of human connection in KOJIMA PRODUCTIONS’ latest game, DEATH STRANDING (2019), has been reimagined for the WALL experience. With a soundscape inspired by DEATH STRANDING, visitors will be transported into an unfamiliar environment where a wall is the only channel of connection to two opposing worlds – one alive with biological cells and the other flowing with galactic energy particles.
As visitors approach the wall, the cells and cosmic particles will respond to their presence, dividing and clustering with one’s movement. The mesmerising patterns that form will offer hints of communication between different spaces and time. Whilst technology can isolate us, WALL demonstrates its potential to create connections in ways that were never previously possible.
PLAY
Dream Shaping, 2021
By Media Molecule (game developer) and Marshmallow Laser Feast (media designer) 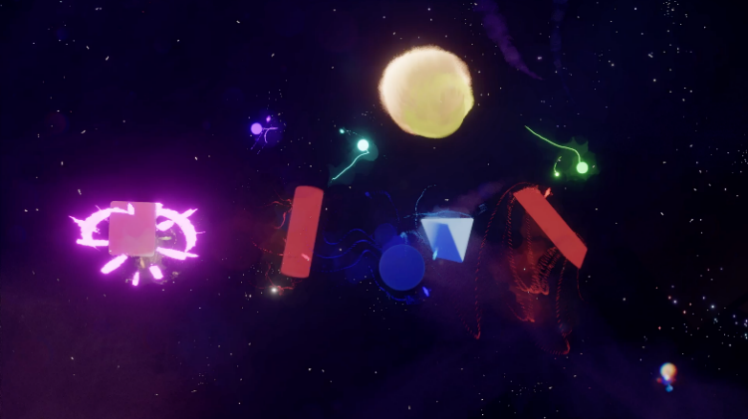 Photo credit: Dream Shaping, Media Molecule and Marshmallow Laser Feast, 2021
The realm of PLAY celebrates the joyful and performative sensibilities that videogames inspire in us, their players. It takes the form of a giant play-space where visitors experiment in both the physical and virtual worlds. Equipped with tracking helmets and a selection of oversized soft geometric forms, participants become part of an improvised performance while other curious visitors look on.
Media Molecule’s vast digital toolset, Dreams (2020) empowers makers to build and share their creations be it games, music, art or animation. Based on Dreams, the installation Dream Shaping (2021), invites visitors to work together to create and manipulate their custom experience. Marshmallow Laser Feast’s acclaimed artistic work, which experiments with making the digital ‘tactile’, has further enhanced the installation, resulting in a uniquely playful experience.
NARRATIVE
Book of Sand, 2021
By Tequila Works (game developer) and The Workers (media designer) 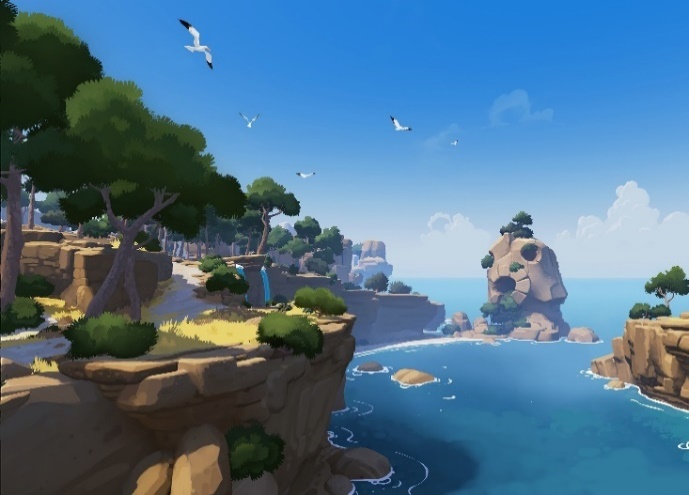 Photo credit: RiME © 2017 Tequila Works. All rights reserved.
The NARRATIVE realm showcases the power of videogames to tell stories and create new forms of fiction. The commission, Book of Sand (2021) invites visitors to step into the mysterious Mediterranean world from RiME (2017).

Inspired by the novella, Book of Sand (1975) by Jorge Luis Borges, the installation explores the notion of an infinite story that has neither “any beginning or end”.  Visitors are to follow the lead of the spotlights by stepping into the light to trigger changes on the screen, such as the crumbling of statues or shifting night into day. Depending on the choices made and the collaborations between players, each rendition of the narrative will differ. 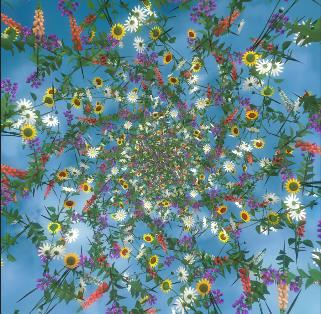